Where Did The Celtic Cross Originate?

The Symbolism of The Celtic Cross

Some believe origins of the ring on the cross represent the Roman sun-deity Invictus. It is believed that the early Irish monks borrowed this idea of the sun god to explain Christ’s halo, to help explain the concept of Christianity to Celtic pagans. Certainly, as a structural form, the circle in the cross brings great strength to the sculpture providing support to the outstretched arms of the cross. Our traditional Celtic cross pendant is inspired from these early sculptures.

The earliest forms of the cross were not carved out of rock, but were carved into the rock. Fine examples of this type of carved cross can be found at the Gallarus Oratory in County Kerry and the Killaghtee Cross at in Dunkineely in County Donegal which dates from about 650 AD. The early sculpted forms of the cross were quite simple in execution with long stems and shorter arms. During the 9th and 10th century, the crosses developed both structural and artistic complexity representing an important Irish contribution to European art in the middle ages.

The Meaning of The Celtic Cross

The more elaborate high crosses from this later period were often erected to memorialize famous people or places. Over time, the crosses began to be decorated with panels depicting biblical scenes which were used by the monks for religious instruction. The most wonderful example is the Cross of Scriptures, to be found at the monastery at Clonmacnoise on the banks of the River Shannon. This cross is decorated with the stories of the Last Supper, The Crucifixion of Christ and the Guarding of the Tomb. The visual presentation of biblical stories were a useful tool to communicate the teachings of Christ to an illiterate population. This tendancy towards storytelling through stone sculpture is evocative of the great Roman sculptures such as Trajan’s Column found at the Forum in Rome. It is thought that the decorative panels on the crosses were painted in bright colors. 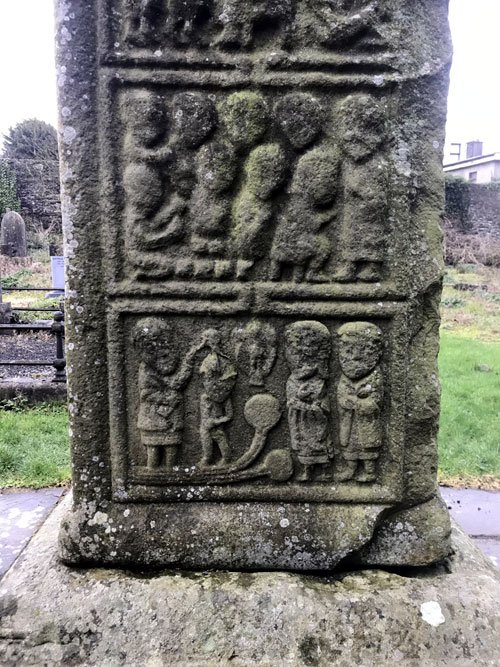 Other Functions of The Celtic Cross

Although Celtic crosses were used primarily for religious instruction, they were also often placed outside the walls of the monastic settlement to mark the boundary of the monastery. The crosses, placed in this way were referred to as Termon crosses. Once inside the monastery, a fugitive could claim sanctuary.

One such Celtic cross is the Market Cross, to be found in the village of Kells in County Meath. The cross was originally located at Cross street and was known as the ‘Cross of the Gate’ of the monastery. The cross was broken by Cromwellian forces as they passed through the town. The base of the cross bears the inscription, ‘This cross was erected at the charge of Robert Balfe of Cailierstown, being sovereign of the corporation of Kells, anno domini 1688’. According to local folklore, this cross also fulfilled another grim function. During the 1798 rebellion, captured rebels were hung from the arms of the cross by the crown forces. 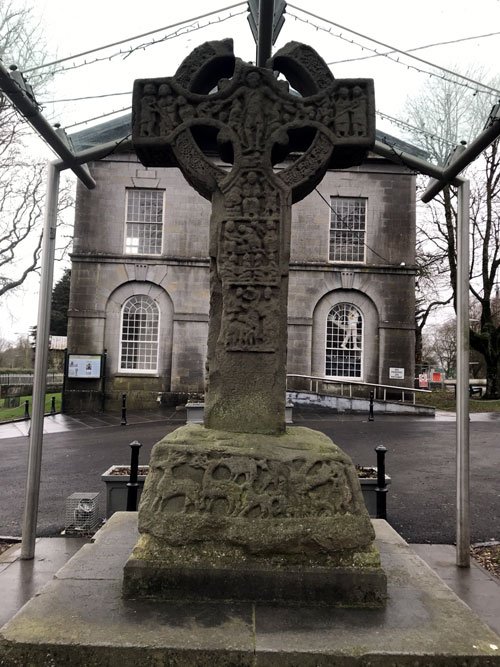 The Celtic revival in the latter part of the 19th Century saw a growth in popularity of Celtic Crosses as headstones. Today throughout Ireland the evocative monuments can be found in abundance at every burial ground, leaving a distinctive feature on the landscape. Of course, where Irish and Scottish emigrants settled they carried this burial tradition with them, so this Celtic memorial is found throughout the United States, Canada, Australia and New Zealand. Our cross necklace collection is a representation and dedication to all of those designs that evolved throughout the years. Our silver necklaces and gold necklaces boast a selection of both traditional as well as contemporary designs. A true connection with faith and heritage.

Check out this handy graphic outlining all you need to know about the origins and meaning of the Celtic Cross.

If you enjoyed reading this blog, then you might be interested in reading about the history of the Celtic cross. If you would like to browse our lovely selection of jewelry, you will find many more stories about each of the cross designs to enjoy here.